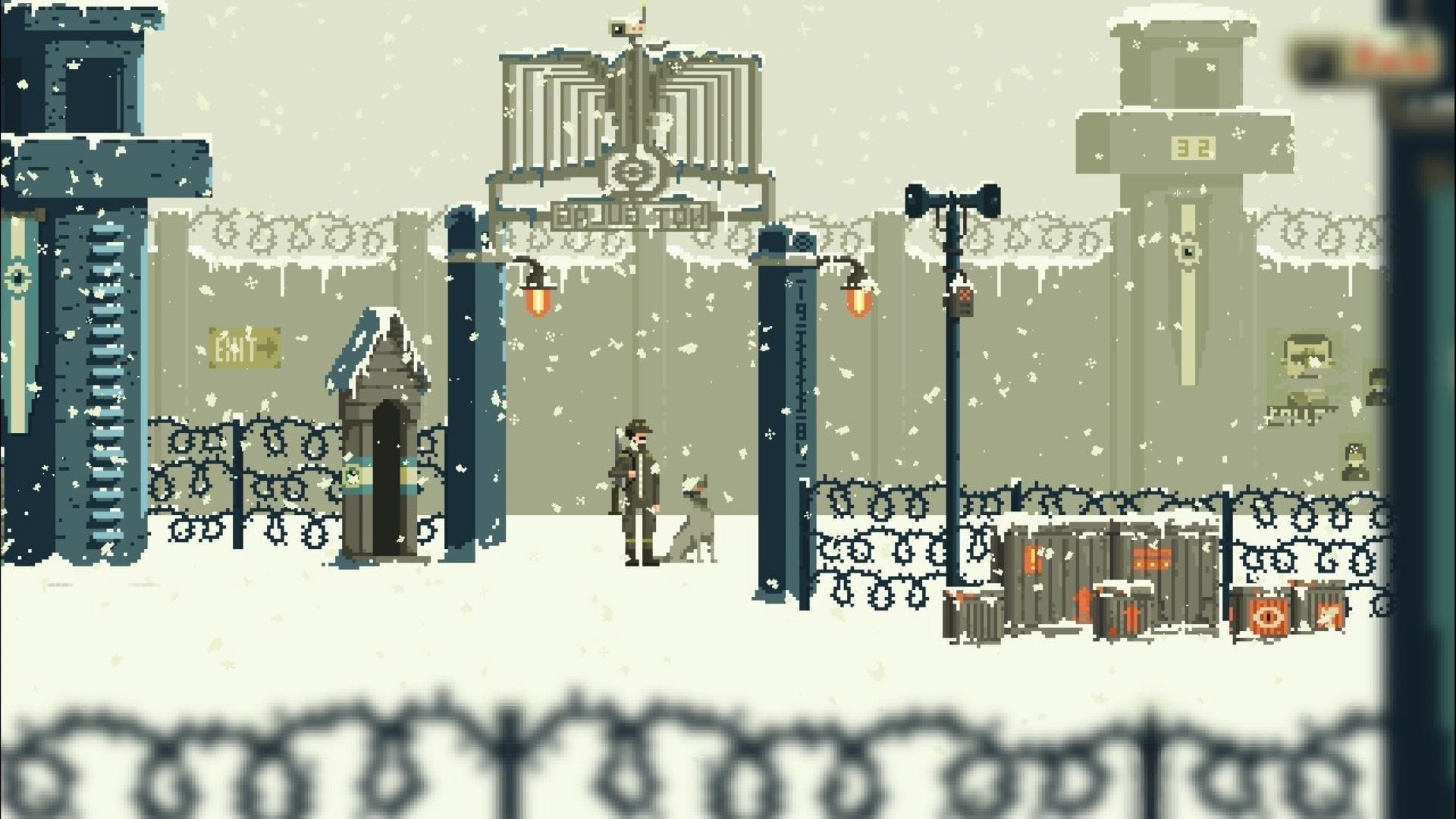 Do you want to compete on a dangerous reality show? It’s one that will result in a lot of death and pain, but on the bright side, the reward is seeing your family again. Though, no one tells you that playing the game will result in you losing your independence and becoming an obedient, passive slave to the Regime. They can’t show that on TV, right? With all their cameras and propaganda, everyone will be watching “The Wall Show,” just don’t lose your will to win.

Ministry of Broadcast is set within a country divided by a giant wall, separating families and loved ones. Within this Orwellian society, Shoeless competes on “The Wall Show,” with the winner being able to cross to the other side and reunite with their family. Framed as a reality show that everyone is watching –  even the player – Shoeless is forced to traverse a new arena each day. There are guards that have orders and will follow them without hesitation, while hired hands act as civilians causing a riot and, at useful moments, acting as a distraction. Constantly, the player is reminded that you are being watched and that everything is all for the broadcast, but it feels more than just that. People in white lab coats can be seen taking notes and asking strange questions. It’s as if you are a test subject and the broadcast is a test to show how someone can go from having free will to becoming docile and obedient. The story about our protagonist is what made Ministry of Broadcast catch my eye. I’ve always had an interest in dystopian societies and with Ministry of Broadcast, winning a deadly reality show just seemed too good to be true.

The platforming gameplay is very precise to the point that it is frustrating. Jumps need to be perfectly timed or you run the risk of breaking your legs in an extremely high fall. Grabbing onto ledges is just as difficult, because if you aren’t facing in the correct direction or even a step too far away, you won’t reach. Nothing is straightforward and might require a couple deaths before fully understanding how the area you are in works. The majority of the time, I found myself restarting over and over again because I was running and stopped late, causing Shoeless to slide right off the ledge, or I was a second too slow trying to grab onto the wall and the piranhas ate me for dinner. Also, Shoeless has no offensive weapons – or boots – so most of the time will be spent trying to evade the guards and listening to him complain about how cold it is running in the snow.

Another issue that I had, tying in with the precise controls, was the checkpoint system. There is no way to manually save the game. Each death takes you back to your previous checkpoint, if you haven’t reached the next one. This was even more frustrating than the controls, as I’d go through long-winded sequences of puzzles just to die and have to start all over again. And if I had to start all over again, I was stuck with watching the dialogue boxes over Shoeless’ head, unable to skip them.

Not quite as frustrating as the controls or checkpoints were the puzzles. While some were straightforward and challenging in their right, others were a lot more complicated than what they seemed. In one room with toxic gas and waste, I was forced to jump over flaming barrels. After many trials and errors, I finally made it to the other side of the room, just in time to die as I didn’t realize that the slower I went, the quicker the room was killing me. Other puzzles just seemed to be added for the sake of having something to do, like trying to outrun an alligator that wants to use you as a toothpick or trying to not die while dodging a fireworks display. Combined with the touchy controls and lack of checkpoint system, sometimes the puzzles felt like they were challenging in order to add to the overall gameplay time.

While I was irritated with the controls and puzzles, I couldn’t help but to admire the artwork and atmosphere of Ministry of Broadcast. When running around the arena, propaganda lined the walls. Posters reminded Shoeless that the Regime saw all with its constant surveillance cameras and eyes on blue backgrounds wouldn’t let you forget that. There were statues and murals that told the story of how the country came to be divided and depicted how man should be submissive to those who believe they know better for the greater good. Once in a while, an exit sign could be seen, pointing to the end of the level or a sign would tell you about your health when you got closer to it. These subtle hints were built into the background instead of using a traditional user interface. While the hints didn’t come often enough, it was still neat to see how the developers were able to make them fit within the posters and other material that lined the walls. I especially enjoyed the muted color palette that was chosen. It added to the atmosphere of Ministry of Broadcast and, since it takes place in the middle of winter, drives home how bleak and miserable the characters are at the wall.

Lastly, the some of the dialogue and Shoeless’ actions are witty enough to remind the player that he doesn’t take himself too seriously. In the opening sequence, he hops out of a truck, landing in a stance on the ground, making a grand entrance. Another time, Shoeless eats some bad cake that causes him to have dreams of himself as a James Bond-like spy with finger guns, shooting guards, causing explosions, and stealthing around. I thought this was a fun, yet short sequence to add in as around this time, Shoeless starts to become a lot more serious about himself. There is also a crow that follows him around, helping out once in a while, but mainly makes fun of him when he dies. When I continuously died, I found the bird annoying, but he did have some funny lines that I gave a good chuckle.

Ministry of Broadcast tells an interesting story of one man’s journey to see his family no matter the cost, even if it means losing who he is. The controls are stiff and too precise, and the unforgiving checkpoint system and relentless puzzles make the game tedious and repetitive. The narrative is compelling, with an atmosphere and artwork that helps to enforce the type of society that it is set within. As for the minimal dialogue that is within Ministry of Broadcast, it is quirky, yet serious when it needs to be. Overall, Ministry of Broadcast shines light on a world that I’d never want to be a part of, where the collective is greater than the individual.

Haley reviewed Ministry of Broadcast on the Nintendo Switch via a code provided by the publisher. An update with a new “story mode” update will be available in the future.

Ministry of Broadcast
/
A Shoeless Man in a Dystopia

Ministry of Broadcast is an intriguing narrative platformer with wonky controls, overly challenging puzzles, and frustrating checkpoints. It relies a little too much on its witty humor and detailed artwork to save it.