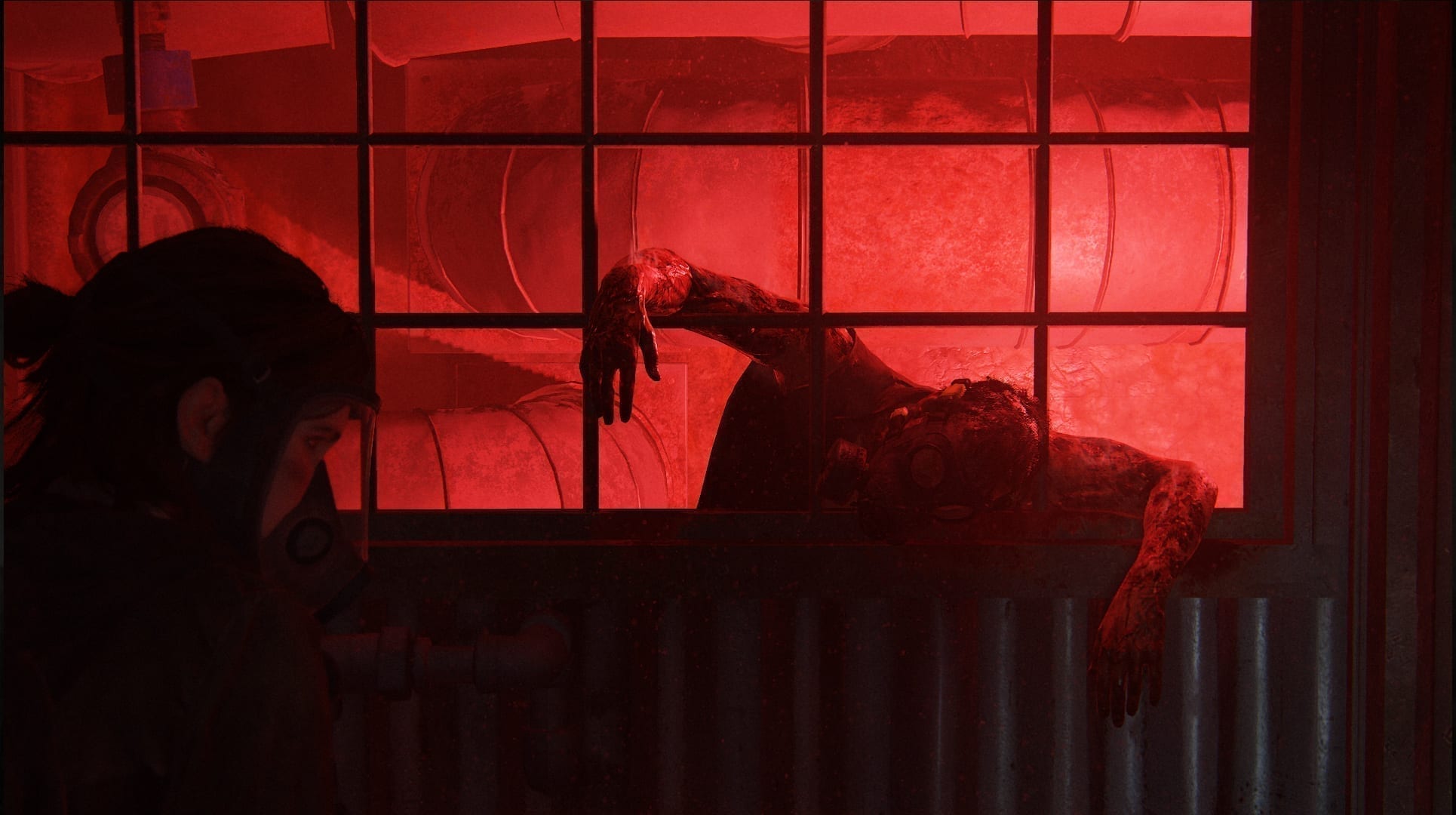 With coronavirus all over the news, billboards, at work and even in our general conversations, it’s easy to see why we may want to escape to a fantasy world for a few hours. This is hard to accomplish when there are so many games about viruses, plagues and apocalypses. So here are 10 games to avoid like the plague for now.

The world of Dishonored tells the story of a protagonist who has been dishonored and their journey to redemption… or becoming a murdering psychopath depending on how you play. Both Dishonored and Dishonored 2 are set during plague outbreaks. The first being the rat plague and the second being Bloodfly Fever.

In both games, you spend a lot of time moving through streets and abandoned apartments filled with the corpses of plague victims. Guards will be tossing bodies into the river and some doors will be bolted up with a massive white X painted on it. Although we thankfully won’t have to deal with massive rat infestations or Bloodflies when dealing with coronavirus, these scenes are very hard to swallow whilst living through a pandemic.

World of Warcraft has had its fair share of plagues and diseases, such as the Plague of Underneath and the New Plague, as well as diseases that can be inflicted on players to lower their stats. But one accidental plague stands out in World of Warcraft history. The Corrupted Blood incident was an accidental virtual pandemic that happened in 2005 as a result of the end boss of the Zul’Gurub raid being able to cast a spell which would inflict the player with Corrupted Blood, a highly contagious debuff effect.

This was only supposed to last a few seconds but ended up spreading across the whole virtual world, with players fleeing highly populated cities and desperately avoiding each other and animals in order not to catch the disease which was fatal to lower-level characters. What was even worse was that NPCs and animals were asymptomatic carriers of the disease. Blizzard Entertainment put in place a voluntary quarantine to help slow the spread, though many players didn’t take it seriously whilst other higher-level characters went around deliberately infecting people.

The plague ended a week after when Blizzard hard reset the affected servers and prevented pets from catching the disease, which was how it had escaped the boss area. A similar occurrence happened again in 2017 during the Green fire incident, though Blizzard quickly responded by making pets immune and “disinfecting” players. Epidemiologists have used this event for research, as it gave them an idea of how people would react to a modern pandemic.

As part of COVID prevention, you’ve been told to self isolate or your area/country has gone into lockdown. Pulling yourself away from the news, you turn to video games to take your mind away from the stress. You turn on Neverwinter Nights, which has a deadly plague killing people within the city of Neverwinter and a quarantine has been put in place to prevent further spread.

Okay, let’s play something else.

In Deus Ex, Gray Death is a virus created by the Majestic 12 group in their plot to take over the world. It causes flu-like symptoms and coughing before the infected loses energy and speech, turn gray and then die.

The initial symptoms of Gray Death give it similarities to coronavirus. On top of this there are tons of conspiracy theories that COVID-19 is man-made virus. Either way, if you’re trying to experience some escapism during your down time then it’s probably best to avoid playing Deus Ex for now.

Much like the Black Death, coronavirus is likely to go down as one of our deadliest pandemics yet – so let’s not be reminded of either. The story of A Plague Tale: Innocence is set during one of the deadliest outbreaks of the Black Death in France. We see dead bodies piled up in mass graves and the invisible enemy is visualized through rat swarms which will kill you if you’re caught.

A Plague Tale is shocking without having to play it during a pandemic; it delves right into the devastating effects of the Black Death and the sheer scale of devastation it caused throughout Europe. Villages and even towns were left completely desolate after the disease had claimed the majority of its inhabitants. Those who are left alive are in the dark about the nature of the virus, so desperate to stop it they would even go as far as killing children if they are believed to be spreading it.

The scariest part of the Cordyceps Brain Infection in The Last of Us is how it’s actually a real thing. Ophiocordyceps Unilateralis is a fungal parasite that affects ants, which inspired the disease which wipes out the majority of humanity in The Last of Us series. Once the fungal spores have attached themselves to the ant, the events that unfold are very much similar to a human being infected with the Coryceps Brain Infection with the fungus eventually taking over the living host.

On top of this, The Last of Us presents the worst of humanity during a devastating plague outbreak. The military have bombed cities that were unable to control the outbreak, and what’s left of humanity have formed clans and cults who are hellbent on killing each other.

Luckily the chances of this infection being passed onto humans is nigh impossible in real life. Hopefully?

Although we can probably rule zombification out of coronavirus symptoms, let’s not lay all our cards on the table in terms of what 2020 has left in store for us.

Jokes aside, it was a major shock to play the Resident Evil 3 remake back in April during the wake of the pandemic. The game starts with scenes of the T-virus sweeping across Raccoon City, as doctors and scientists are desperately trying to find out what’s going on. Throughout the game we read witness accounts from doctors who talk about a lack of PPE when tackling the virus. This hit very close to home at the time.

The pandemic has made germophobes out of many of us, even to the point where we’ve actually started washing our hands after going to the toilet – it’s a crazy world we live in. But one thing that has become clear is how people will react to a simple sneeze now, which was difficult for hayfever sufferers during the summer when giving into that tingling of the nose in a supermarket would result in everyone looking at you disgustedly.

Sneeze is a very uncomfortable game to play right now as it involves going round and deliberately sneezing on someone to infect as many people as possible with the Swine Flu. Even without a pandemic going on, it’s hard not to cringe at how disgusting this game’s premise is.

The Division is an online RPG set in the aftermath of a deadly pandemic. Quarantine is currently in place in New York, but criminal activity is thriving as a result of order being lost during the outbreak. The Division’s premise was realistic both in how criminal activity took advantage of the outbreak but also how the virus was spread through bank notes.

Similarly during the coronavirus pandemic, many businesses have begun refusing change as a form of payment to help prevent the spread of the virus. Although order hasn’t been lost quite on the scale of The Division, The New York Times recently reported that violent crime and vandalism is on the rise in subways due to criminals taking advantage of there being fewer witnesses as a result of the pandemic.

It goes without saying that a game where you orchestrate a pandemic outbreak with the intention of wiping out all human life on Earth probably isn’t the right game to play right now. This is why Plague Inc. is at the top of this list. Not only does it feel barbaric to play a game such as this when people are dying across the globe as a result of a pandemic, but it’s also frightening to see how a virus with a low death rate can spread across the globe and then mutate to become more deadly.

Developer Ndemic Creations recently released DLC for the game which has the player control an international health organisation with the aim of the game being to stop a pandemic. The announcement for the DLC explained the reasoning behind creating it: “We hope it will help players understand the scale and complexity of dealing with COVID-19 as well as simulating the effectiveness of different responses.”

Although the original mode of Plague Inc. wouldn’t be very comforting to play right now, the new DLC is much better suited as well as educational.

A Game you Should Play Right Now: Death Stranding

Too often do games show the worst of apocalyptic situations. The world of The Last of Us shows that humanity can be cruel and selfish even when people should be sticking together, Resident Evil 3 has mega corporations hell bent on making money out of dire situations even at the cost of human life, and no one in the world of Fallout has bothered to pick up a brush and clean the floor in 200 hundred years other than the snobs in Tenpenny Tower.

Hideo Kojima is such an extraordinary visionary that he somehow foresaw the importance of a delivery system and remote communication years before the pandemic happened. Death Stranding tells the story of Sam Porter Bridges, a glorified postman who literally brings humanity back into civilization by delivering parcels whilst connecting his customers to a communication system to help re-establish a government.

The pandemic allowed us to rediscover the importance of essential workers such as delivery drivers, and right now the game acts almost like a love letter to these people. Every delivery driving currently going to stranger’s houses and putting themselves at risk to ensure they get their parcels on time is a Sam Porter Bridges.

Jess is a PR Administration Assistant that does games journalism in her spare time. She loves RPGs and horror games.