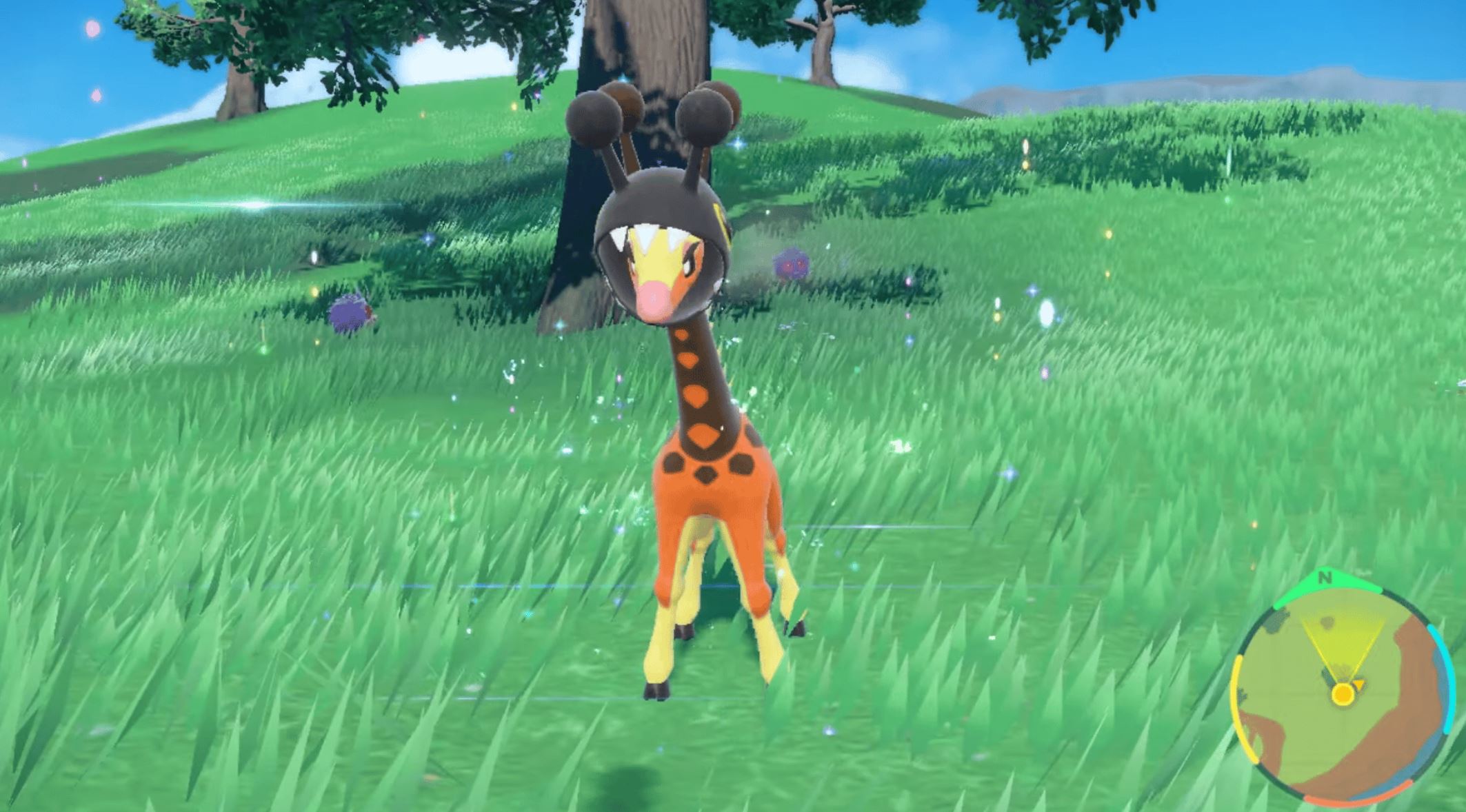 A new fifteen-minute video event published by Nintendo revealed a ton of new information about Pokemon Scarlet and Violet, the upcoming ninth generation Pokemon games. Scarlet and Violet are just over one month away from release, as they will debut worldwide on November 18, 2022. While previous trailers had highlighted a few of the creatures available to catch in the Paldea region, this video focused instead on gameplay mechanics and how to progress through the game’s three different stories.

However, one new Pokemon was revealed: Farigiraf, a new evolution for the Generation 2 Pokemon Girafarig. Like Girafarig, Farigiraf is a Normal/Psychic-type Pokemon. It seems to evolve by leveling up, as the trailer showed off a Girafarig winning battles in the field before evolving. Farigiraf’s head and tail fuse together into one, making it look like the Pokemon is wearing a stylish helmet or hoodie. It is a Pokemon with both offensive and defensive abilities, and is able to use the abilities “Armor Tail” and “Cud Chew.”

It has two brains that work together to increase Farigiraf’s overall psychic energy. Looks like two heads are better than one!

Viewers also got to see what happens when a Pokemon Trainer challenges a base held by Team Star, a group of troublemakers who get in the player’s way when they take on the Pokemon Academy’s Treasure Hunt event. Claiming a base is a timed event – the player must defeat a certain number of Pokemon within a ten-minute period. To do this, the player can use the new “Let’s Go” command, which sends out their lead Pokemon to battle on its own. (This command can also be used to pick up items in the field.) If the player completes the objective and defeats enough Pokemon in time, a Team Star leader will appear and challenge the player to a battle. This video showed off Mela, who leads Team Star’s fire-themed Schedar Squad and stands atop a vehicle that fans suspect may be itself a new Pokemon.

The second of three stories involves the player taking on Titans, extra-powerful Pokemon who are located all around the open world of Paldea. In order to fight Titans such as the crab-like Clawf, the player will have to collect items in the field and craft them into one-use TMs using the TM Machine. This is a major difference to how TMs have worked in previous generations, but it does seem to be a good addition given Scarlet and Violet’s commitment to its open-world design. While exploring the world, players can also treat their Pokemon to Picnics, where they can play with them, groom them, and enjoy a variety of homemade sandwiches. Some lucky Trainers may even find Pokemon Eggs appearing randomly in their basket while picnicking!

While exploring Paldea’s wilderness, relax and spend time with your Pokémon at a picnic!

Make your picnic truly unique by changing the design of the tablecloth, cups, water bottles, and other picnic items to your liking!

Lastly, the Victory Road story will be based around conquering eight Gyms and claiming the title of Champion, similar to previous Pokemon titles. The new trailer once again featured Brassius, a Grass-type Gym Leader who battles using a Sudowoodo that can Terastallize into the Grass type. But before players can challenge Brassius, they will need to complete a challenge called “Sunflora Hide and Seek,” which involves searching the town for a number of missing Sunflora. Each Gym will have a challenge players must complete, which brings to mind the Trials from Pokemon Sun and Moon.

Of course, players will not have to choose just one story – they can experience all three while traveling through the Paldea region in Pokemon Scarlet and Violet. Which story are you most excited to tackle? Which starter Pokemon do you plan to choose? What do you think of the new Pokemon, Farigiraf? Comment below and let us know!