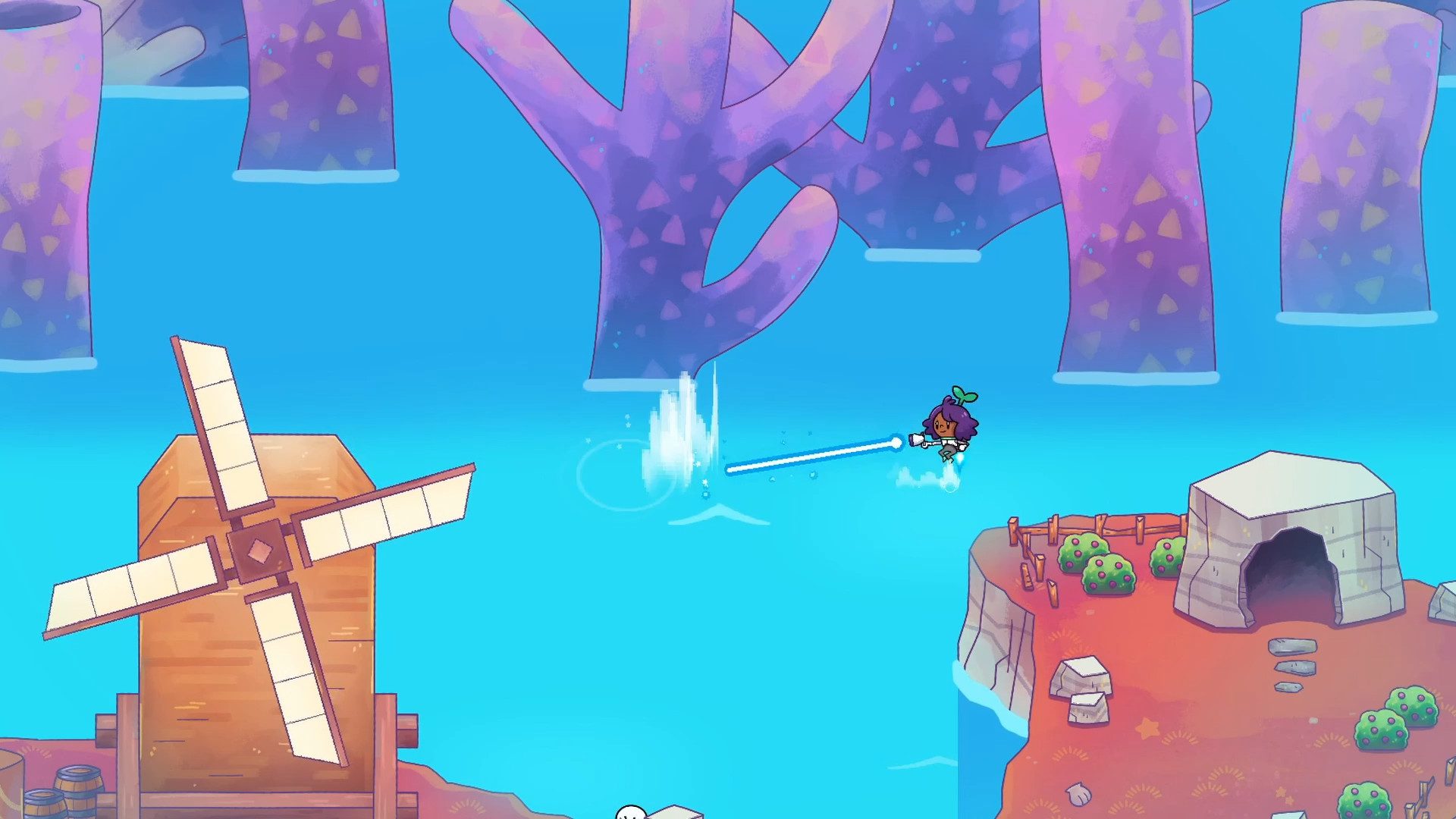 Lost Nova is a peaceful resource management space adventure made by Jon Nielsen. Meet cute little characters, harvest resources, and journey through a planet slowly coming apart in this short, well-crafted, colorful adventure. (Warning: this contains spoilers. Go try the game for yourself before reading on.)

I’m just going to say this up front: Lost Nova is a wonderful little game. It only took me a few hours to complete, but completing it isn’t the point (as we learn in the story). The gameplay involves pointing your beam at various objects in the world to harvest them into useful resources to repair your ship and give you upgrades. If you want you can easily grind out a lot of resources because everything resets when you leave (besides rare crystals and bolts). Use your jetpack to hop onto other islands or hover across the water. Lost Nova involves some exploration, but the map only consists of 5 locations, so it can all be easily traversed in under a few minutes or so. The only challenge is managing your battery meter, which runs out whenever you jump or use your laser gun. This game is supposed to be a completely relaxing experience: there are no enemies, no dying, and no negative outcomes for doing something the wrong way. Because of this, the only motivating factor for the player to do something is to have useful items put behind resource payments. It follows the same idea for gardening or any other cathartic activity: simple, repetitive, and something you can work on refining.

The writing in Lost Nova is where it shines. Even though they’re technically aliens from a different planet, the inhabitants talk like humans, by which I mean no dialog in the game feels forced. Most characters in the game are quirky and lighthearted. There isn’t any character that’s trying to be any more special than another; they’re all just living their lives. The only time I get lost in the dialog is keeping track of whose speech bubble color is whose. The developer tries to have a different color for each character that talks, but some colors are so close to the main character’s that it’s hard to distinguish them apart (just a small accessibility issue). The storyline itself actually touches on some deep mental health awareness topics, like comparing yourself to others and overworking until burnout (which feels oddly relatable). Lost Nova reminded me a lot of when I played Toem. Not mechanics-wise, but the playing perspective was the same and both had an epiphany-like experience at the end.

There wasn’t much that upset me about Lost Nova, but there were a few tweaks design-wise that might have helped. Since there is no dying or any push to make rapid movement, having the jump take up battery resources felt annoyingly obstructive. Sometimes you would have to hop along multiple islands, so waiting in between to charge up wasted my time through the tedium of constantly hopping around. Having the shift button be the run action was okay, but maybe making it the right mouse button would’ve been better. In fact a lot of the inputs could be moved around so they sat better on the keyboard. While “Map” does begin with “M,” using that key to pull it up meant I had to either stretch my left hand a lot or take my right hand off the mouse, which was too much effort than was needed. It should have been “Q” or another key that was closer by. The last thing I’m going to nit-pick on is the story. While it was friendly and gave a clear message about mindfulness, self awareness, and rest, the pacing was heavy-handed at the end. We didn’t learn about the past and how our character was overworking themselves until the very end of the game. There could have been stopping points like flashbacks or mental obstacles that our character had to overcome throughout the game to spread the pacing out a bit.

The art is pretty, cutesy, and colorful. Everything is 2D, which makes pushing around blocks look awkward sometimes, but I think it was well put together given the top-down perspective. There wasn’t animations, which I wouldn’t blame the dev for leaving out as they can feel tacky in a 2D game, but what replaced it were these wonderful fully-drawn stills like a picture book. The characters were memorable and there were only duplicates of a few kinds of NPCs.

The music is fantastic. Fits the mood perfectly for any scene. Fades in and out when going to different sections of the world. I think it’s dynamic in some parts, like the themes fill with more instruments the more you upgrade. The music has a leitmotif that is carried throughout the whole game, with a swelling crescendo at the very end (and a rocking guitar lick to go with it). It’s the icing on the cake for such a sweet little game.

To summarize: gameplay was simple (perhaps too simple), but served the purpose of being a light casual game. The story was well-written, humorous, and impactful. Art was colorful and had a plethora of delightful characters. Music and audio were mixed well and drove an emotional narrative throughout.

Game was played on Steam using a code provided by the developer.

Lost Nova is the perfect game to wrap up in a blanket, drink some tea, and get cozy with. If you’re looking for something to play after a long stressful day, this is the game for you.