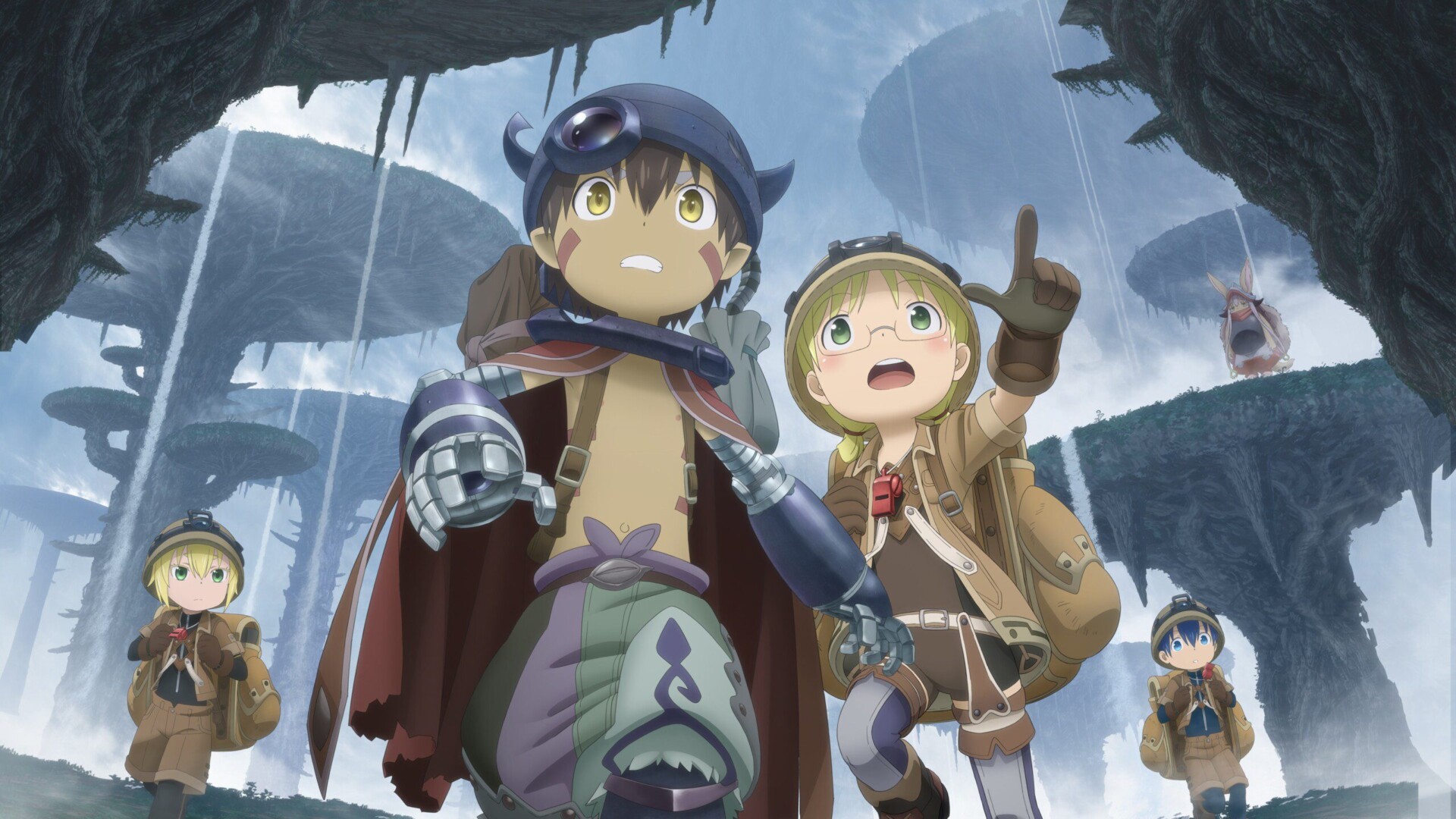 There are a number of games which have been based off anime titles. Fans of a given series can almost be guaranteed to buy the game because of their fandom. And one would think that such “guaranteed” sales requires a certain responsibility on the part of developers to provide an experience which fans will appreciate as well as gamers who aren’t yet fans of the source material. Unfortunately, Made In Abyss: Binary Star Falling Into Darkness either really doesn’t care for the anime’s fanbase, or they’re attempting to keep non-fans out in the most excruciating fashion possible.

Based off the anime series, and developed by Re:Zero studio Chime, Made In Abyss carries two parts to it. The first is an unskippable tutorial section called “Hello Abyss” which basically highlights events from the first eight episodes or so of the first season. The second is “Deep In Abyss,” set shortly afterwards involving a whole new batch of kiddie cannon fodder at Belchero Orphanage. In order to get to the second part, you have to beat the “Hello Abyss” section. More about this a little further down.

From a visual standpoint, Made In Abyss uses the Unreal Engine (presumably UE4) to help bring Akihito Tsukushi’s world to life, faithfully reproducing the art style seen in the manga and anime. Creature designs are just as weird and wonderful, cel shading makes the characters look much like their 2D counterparts, and all the fine details should appease fans who want an exact translation from the anime to a game environment. Lighting effects are well implemented, from the nearly constant daylight of the first layer to the highlights for harvestable resources. You won’t have to worry about finding things to pick up for the most part. The user interface is well laid out and informative, whether you’re out in the Abyss or back in Orth buying supplies. However, certain areas in the game seem to have weird “phantom” geometry, where spots look clear but passing through them leads to you seeing terrain features in your immediate vicinity. Additionally, some environmental hazards are rather poorly placed and difficult to pick out among ground cover in the lower levels.

Made In Abyss‘ audio is another one of those “well done, but…” sort of aspects. The music is atmospheric, shifting from exploration to battle without dropping a beat, though it lacks the “gotta have it” quality of a truly excellent soundtrack. Sound effects abound and are implemented quite well, from creature calls to the sound of rock breaking as you excavate Relics. The voice cast from the original series (or at least the English dub) returns, reprising their roles along with new cast members creating new characters. Established characters sound just like they do in the anime, and the new characters are certainly well acted, but feel like they’re missing a little heft somehow from a narrative perspective. It all sounds right, but it doesn’t blow you away.

So now we get to the gameplay of Made In Abyss, and here’s where the game plunges into the depths. At its most basic, Made In Abyss is a JRPG-action title. Third-person perspective, camera defaulting to a spot behind the character’s back, wandering around large play areas, fighting monsters, picking up stuff, pretty basic formula. To their credit, Chime did work in the “Curse of The Abyss” in a consistent fashion. Lorewise, going down into the Abyss doesn’t do much to a person, but coming back up causes increasing physical distress and injury the further up you come from. The problem is that they hit you with it too often. More than about 20 meters or so, your character starts heaving up their lunch, which has the benefit of replenishing your stamina but cutting into your “hunger” bar. The only way to deal with this is to ascend fairly slowly, much like you would if you were scuba diving or climbing Mt. Everest.

Compounding this is the insanely aggressive wildlife. Again, from a lore perspective, this is reasonably accurate. However, from a gameplay perspective, it’s a complete pain in the ass because certain activities like fishing require you to stay in one spot, which inevitably has monsters spawning on top of you to chew your face. There are ways of getting around this, but they’re poorly explained. Worse, as you’re ascending ropes or cliff faces, creatures will pop up to attack you during your ascent. They rarely if ever appear when descending, but God help you on your way back up to the surface.

The inventory system for Made In Abyss is seriously obnoxious. Out in the Abyss, you have a weight limit. OK, fine, makes perfect sense. The problem is that the clothes you’re wearing count against this weight limit, which does not. Stuff in my backpack or strapped to my backpack, sure, but I’m wearing my boots, not keeping them in mint condition. If I’m keeping a spare pair in my backpack, fine, but the ones on my feet shouldn’t be counting. As if it wasn’t bad enough, you can get overencumbered very easily, which leads to you being unable to run away or swing a weapon. And given the propensity of random monster spawns right on top of you, it’s a recipe for extreme frustration when some critter decides to beat on you because you just picked up a rock which you may need for crafting.

Speaking of which, the crafting system is extensive, as one would expect in a JRPG. But certain pieces of gear (namely weapons and fishing poles) have a durability mechanic. When playing through the “Hello Abyss” section, this durability meter is listed but not actually used. It’s only when you’re going through “Deep In Abyss” that things start getting worn down. There is no repair mechanic short of heading back to the surface (and hoping you don’t need to use those items on the way up), which means you’re either destroying weapons left and right or you’re having to carry spares that add weight to your backpack. Factor in foodstuffs to keep your health and hunger meters up, ammunition for ranged weapons, and raw materials for replacements on top of the Relics you need for cash and XP, and it feels a lot more like a perverse variant of Tetris than an adventure game.

Watching the anime, you get the feeling that a lot of compression has occurred from a narrative standpoint translating from page to screen, and even then its pacing can charitably be described as “languid.” Purportedly, creator Akihito Tsukushi worked on the story for the game version of Made In Abyss, and whatever constraints might have been placed in the medium of animation have completely vanished here. This is not a good thing. The pacing of the story for “Deep In Abyss” tied to a death march degree of grind leads to a complete lack of concern for the other characters and total disinterest in whatever giant plot twist it was building up to.  When it seems like you’ve been playing for days, and your save file only shows a dozen hours or so, it’s a bad sign. Because I had to go through “Hello Abyss,” even if it ended on a pseudo-cliffhanger, I felt a sense of narrative satisfaction. After twelve total hours of “Deep In Abyss,” there was no way I could fathom trying to reach the end of a story that didn’t grab me and gameplay that felt like it was actively trying to keep me from progressing.

There’s no sense of stakes. Your custom character is basically a mute outside of the occasional grunt in the field, so you have no deep connection to them. The other NPCs are either the same ones who got left behind after the second or third episode in the anime or ones who we have no opportunity to interact with, and thus have no vested interest in. Being completely fair, your own character progression through the game’s skill tree is an equal slog through the opening levels, and doesn’t get much better even after deeper parts of the tree are finally unlocked. You’ll have banked a lot of skill points to give your character when those sections unlock, but then you’re just grinding away to wait for the next section. It’s a disconnect which kills a lot of potential enjoyment. The developers seemed so intent on staying faithful to the source material that they completely missed the point about the project being a game. All the more disheartening that the forced tutorial has better narrative pacing, despite having a lot less story content and far fewer mechanics active.

The hardcore fans of the anime will undoubtedly have obtained Made In Abyss: Binary Star Falling Into Darkness, possibly even shelled out for the collector’s edition, and they’re perfectly fine to take pleasure in that fact. But for the rest of us, this game is just an utter mess of punitive gameplay overlaying hyper-aggressive systems and shackled to an unattractive story with lackluster characters at its core.  It might appeal to a very small intersection of players who are fans of the series, fans of JRPGs, and confirmed masochists, but not for a general audience.

Axel reviewed Made In Abyss: Binary Star Falling Into Darkness with his own bought copy on PlayStation 5. The game is also available on Steam and Nintendo Switch.

Made In Abyss: Binary Star Falling Into Darkness
/
A Pitiful Exercise

Fans of the anime series or manga may eat it up with a spoon, but "Made In Abyss: Binary Star Falling Into Darkness" is less an action-JRPG and more of a misery simulator which equates willingness to blindly accept the painful systems as "enjoyment." If you're not a fan of the series or a glutton for cruel and unusual punishment, pass this one by.

4/10: Cloudy - Axel Does Not Recommend
About GameLuster's Reviews