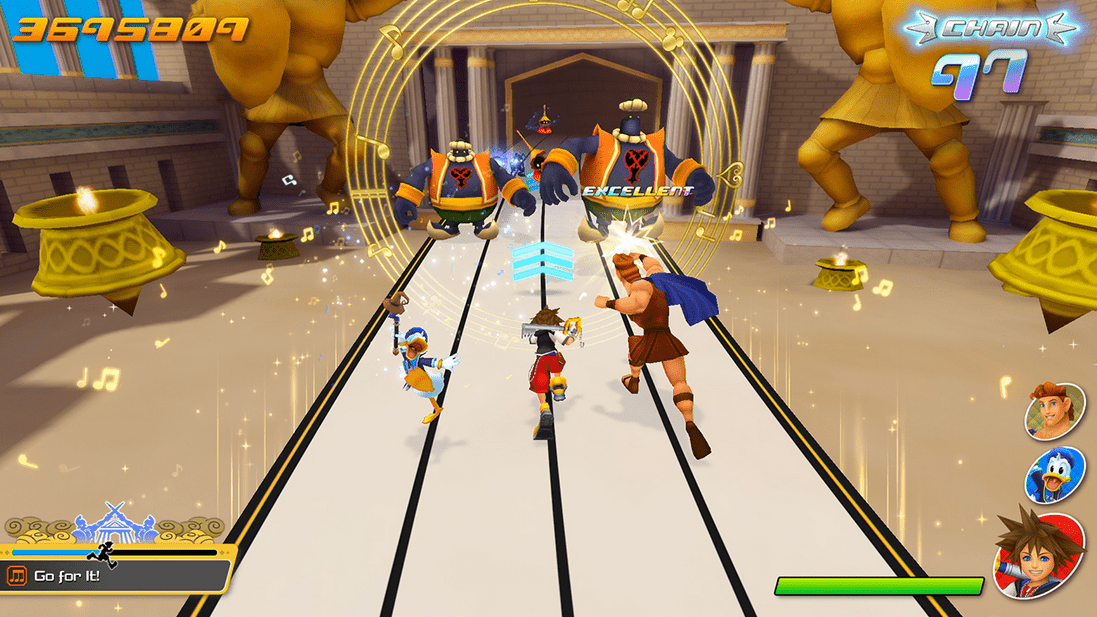 Square Enix surprised fans with an unexpected trailer entitled “Kingdom Hearts 2020,” revealing several new pieces of information regarding the future of the beloved franchise. In addition to several smaller announcements — including new figurines and a Kingdom Hearts 3 soundtrack featuring orchestral arrangements of favorite pieces – the biggest news of all was the first look at a brand new game.

Kingdom Hearts: Melody of Memory is a rhythm game featuring a similar art and design style to Square Enix’s previous Theatrhythm Final Fantasy and Theatrhythm Dragon Quest titles. The game has been confirmed to contain over 140 songs, including franchise favorites such as the “Destiny Islands Main Theme” and “Roxas.”

Protagonist Sora and friends Donald and Goofy are seen using the power of rhythm and music to defeat Heartless, travel to distant worlds, revisit scenes from previous titles in the series (including side games like Kingdom Hearts 358/2 Days)  and even defeat menacing bosses such as the powerful Nobody Xemnas. In addition to classic party members, Sora is also seen accompanied by his best friend Riku and beloved Disney companions, including Hercules and Aladdin. We even see the return of some classic outfits from earlier in the series, hinting that “memory” might indeed play a role in the rhythm game’s storyline.

The latter half of the trailer hints at the game potentially containing a darker story, one which will feature the character of Kairi in a significant role. Kairi is shown wielding a Keyblade of her very own as she faces down mysterious enemies and resolves to assist Sora. Previously, fans of the series had complained about Kairi’s decreasing presence and lack of fight scenes in titles, including Kingdom Hearts 2 and Kingdom Hearts 3. Hopefully, Melody of Memory will address some of these concerns.

In addition to Melody of Memory, new expansions are being added to the mobile game Kingdom Hearts: Union X [cross]. The first will feature the Disney villain Maleficent, presumably in an antagonist role. The second, titled Dark Road, will function as an entirely new game with a card-based battle system and will explore the backstory of primary series villain Xehanort. Dark Road had been announced previously but was unfortunately delayed due to the global COVID-19 pandemic. It will release on June 22.

Union X [cross]  is currently available for iOS and Android. Players can create their unique Keyblade-wielding character as they explore the distant past and learn the history behind some of the series’ greatest heroes and villains. While Dark Road will feature an entirely separate story and can be played without having started Union X [cross], it has been hinted that players will be able to link progress between the two games to unlock unique rewards. Also, both games will be accessible via the same app.

The trailer also hinted that two other, as of yet unannounced, Kingdom Hearts projects may be coming soon, representing the second “phase” of the story. It is unknown whether these will be new titles, DLC, or remakes or re-releases of existing games in the franchise. Whatever happens, it seems like 2020 might just be quite the big year for the beloved series!

Melody of Memory will debut later in 2020. It will be available for PlayStation 4, Xbox One, and Nintendo Switch. It is unknown whether the title will also make the transition to next-generation consoles, such as the Xbox Series X or the recently revealed PlayStation 5.

Which classic tracks are you hoping to see featured in Melody of Memory? (I’m waiting for iconic main theme Simple and Clean, aka Hikari). Let us know!