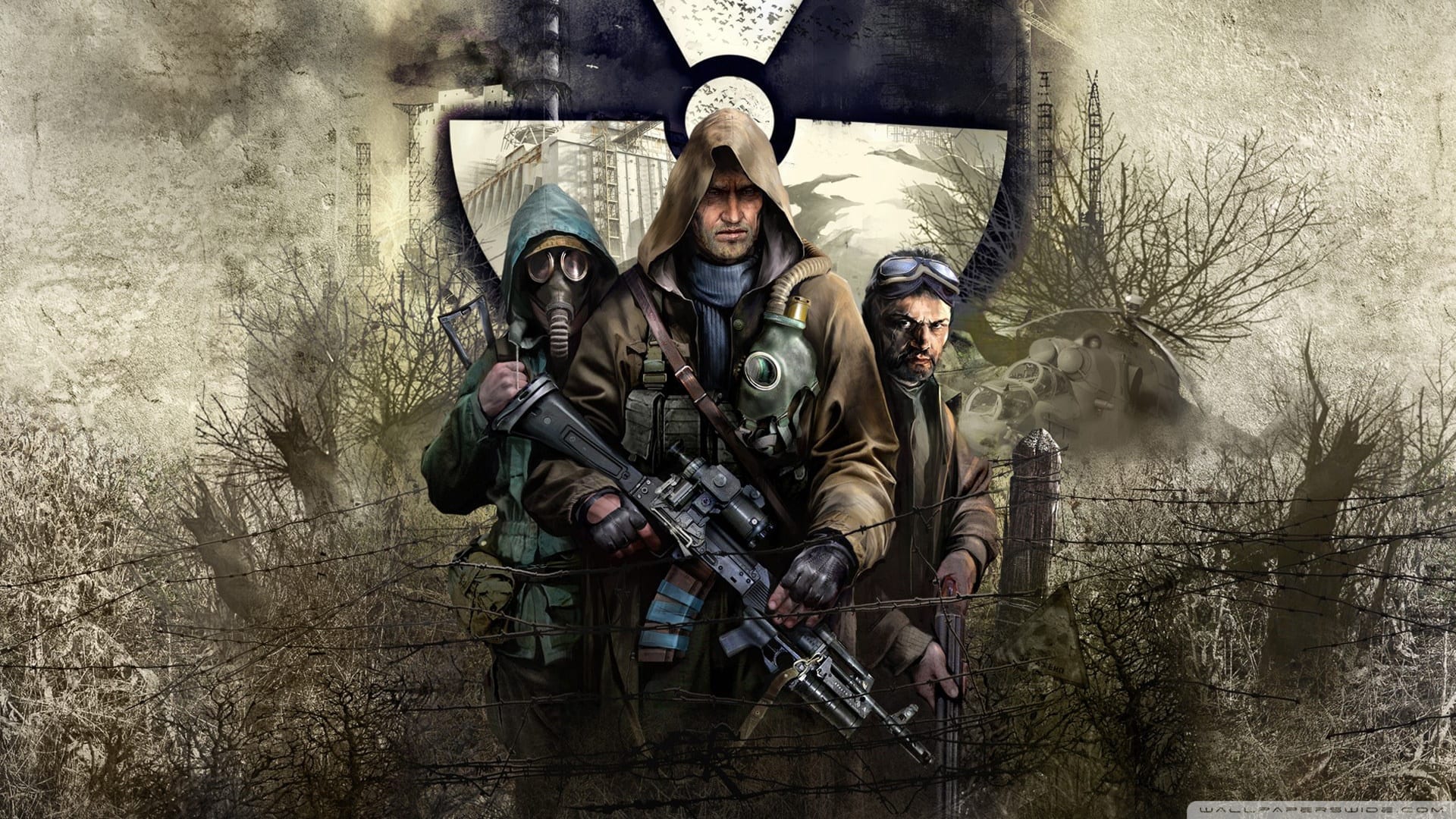 In the last article, we investigated the distinct looks, sounds, and “feel” that make “Stalkerlikes” a distinct genre. In this, the second and final part of the mini-series, we investigate the gameplay mechanics common to most Stalkerlikes. Put on your gas mask and get out your Geiger counter and join me as we dive in.

First, a quick recap as to what a “Stalkerlike” is. Put simply, a Stalkerlike is any game that is reminiscent in either gameplay or tone to the S.T.A.L.K.E.R. franchise. A Stalkerlike will generally feature a post-apocalyptic Eastern European or Russian setting, with Eastern European or Russian characters, vehicles and technology. They are characterized by their bleak downbeat atmosphere, realistically flawed characters, somber soundscape, and their typically dark and muted visuals. Note that for the sake of brevity I will be referring to all three retail S.T.A.L.K.E.R. games – Shadow of Chernobyl, Clear Sky, and Call of Pripyat, and their respective mods, collectively as S.T.A.L.K.E.R.

Many Stalkerlikes are a blend of genres, often combining RPG elements and survival game mechanics with the game’s core gameplay. In the case of many – but not all – Stalkerlikes this core gameplay is that of a somewhat open-world First Person Shooter.

Stalkerlikes tend to take place in semi-realistic settings, therefore no alien worlds, high fantasy landscapes or space stations. This is in stark contrast to many western games such as Skyrim, Prey, Gears of War or the anime-inspired settings of JRPGs. Quite often these settings are real-world locations or fictional locations based on real-world places. Examples include the Chernobyl Exclusion Zone in S.T.A.L.K.E.R. and Fear the Wolves, the London “Gherkin,” and “Cologne Bridge” maps of Survarium and the Moscow Metro system of Metro 2033. This focus on realism often extends to in-game technology, therefore no robots, magic spells or sci-fi ray guns. The juxtaposition of mundane technology and realistic locations with the bizarre “otherworldly” post-event phenomena makes encountering these anomalies all the more startling. The nature of the event which caused the apocalypse varies from game to game. In Metro 2033 it was a nuclear war. In S.T.A.L.K.E.R. it was a mind control experiment gone wrong. In Survarium it is a world engulfing sentient toxic forest. The cause of the apocalypse is not immediately relevant to the gameplay of a Stalkerlike; however, surviving the aftermath very much is.

A common trope of Stalkerlikes is that the post-apocalyptic environment is toxic, where even the air can kill you. This can be due to radioactive particles, infectious spores, poisonous gasses, etc. Whatever the cause, the protagonist – and by extension NPCs – will need protection from it. As a result, almost all Stalkerlikes will feature a gas mask mechanic to some degree. The Metro 2033 franchise is infamous for its protagonist’s reliance on quickly depleting gas mask filters to survive on the surface. The Metro series’ gas mask wipe mechanic – needed so that you can see when your masks lenses get dirty – has become iconic. (Perhaps ironically – it has recently been added to some S.T.A.L.K.E.R. modifications).

A Protagonist with a Weight Problem

Most Stalkerlikes have RPG mechanics built-in, and this includes “RPG-esque” inventory systems. This is usually quite restrictive, with limits on the size, number and weight of items you can carry at any one time. As such, your character will not be able to carry everything including the rusty kitchen sink, nor will they be able to carry the arsenal of a one-man-army. Stalkerlikes tend to have punishing consequences for exceeding (or even nearing) your carry limit. This often comes in the form of reduced speed and endurance. It may also have other detrimental effects such as increased thirst and hunger or compromised stealth due to having heavier footfalls. This forces the player to be very selective about what they take with them and what they pick up en route.

That said, simply finding enough “stuff” to fill your carrying capacity might itself be a challenge, since “stuff” will be thin on the ground. In a Stalkerlike, you will probably have to scour the environment for useful salvage, and then be extremely frugal with what you find.

Survival in a post-apocalyptic wasteland would be far from easy, and many Stalkerlikes illustrate this fact with their survival mechanics. Many will feature thirst and hunger mechanics, sleep deprivation, fatigue, bleeding from wounds, and the effects of becoming ill, poisoned or irradiated. Some may include environmental factors such as temperature and wind chill. What’s more, your equipment, weapons, clothing, etc. may suffer similar degradation with exposure or repeated use, requiring you to maintain them.

The in-game economies of many Stalkerlikes are brutal, to say the least. It is doubtful your character will ever get rich in a Stalkerlike; indeed, just having enough resources to survive might be a struggle. Metro 2033 ingeniously takes this a step further, with the accepted Metro currency being bullets. Therefore, every shot missed is literally money wasted.

Due to a combination of resource scarcity, survival mechanics and brutal in-game economies, survivors in Stalkerlikes will need to “get crafty” with the items they can scavenge. As such, many Stalkerlikes include a crafting system. Metro Exodus’ workbench is a notable modern example. However, it is the Anomaly mod for S.T.A.L.K.E.R. that is arguably the “king of the crafters” since almost everything can be stripped down for parts. These parts can then be used to repair other items or create new items from scratch.

In many Stalkerlikes, the apocalypse has left bizarre manifestations in its wake. There are too many varieties of these “anomalies” to list here, but some standout examples include those with hypergravitational, extreme thermal or mind-warping psionic effects. In S.T.A.L.K.E.R., they are a core gameplay element, since the valuable artifacts – the reason most Stalkers are in the Zone in the first-place – spawn from these anomalies. The Metro series, Fear the Wolves, Next Day Survival and Survarium all feature similarly bizarre phenomena. Anomalies are indiscriminate and will kill anything that enters their area of effect. Smart survivors will use this to their advantage by luring hostiles into them.

In most Stalkerlikes, the apocalyptic event has twisted the fauna and flora of the post-event world. These mutants may come in all manner of shapes, sizes and species, from the largely unmutated rats in S.T.A.L.K.E.R. to the highly mutated whale-sized “Tsar Fish” of Metro: Exodus. Most of these mutated forms are highly aggressive and will prove a significant threat to the player and both friendly and hostile NPCs.

Most mutants are likely to be insentient animals, such as the irradiated mutated wolves in the battle royale Fear the Wolves, but a few, such as S.T.A.L.K.E.R.’s Controllers or Metro’s “Dark Ones” may be fully sapient and possess psychic powers. Some mutants, such as Metro 2033’s “Giant Amoeba” and the “Biomass” defy explanation, and it is up to the player to decide what they are.

In the previous article, we saw how Stalkerlikes tend to portray humanity as being innately factional and prone to interfactional conflict. From a gameplay perspective, this often manifests as the player having the option of choosing to join a faction. This almost inevitably leads to getting into armed conflict with one or more competing factions. S.T.A.L.K.E.R. itself has around nine factions – most of which are joinable in the retail games, and all are joinable in the sandbox mods such as Anomaly. Escape from Tarkov – which is arguably a Stalkerlike – features multiple factions vying for control of the fictional city of Tarkov. Some more narrative-driven Stalkerlikes do not allow you to join specific factions; however, you may still get caught up in their crossfire. Metro’s war between the communist stations of the Red Line and the fascist stations of the Fourth Reich is a perfect example of this.

Due to these shared characteristics, many Stalkerlikes will have similar gameplay loops even if the genres of the games are quite different. Because of this, and the thematic similarities covered previously, I feel confident in suggesting that “Stalkerlikes” should be a recognized genre, alongside “Doom Clones,'” “Soulslikes,” “Roguelikes,” and “Metroidvanias.”

Iain is a 40+ author and gamer from England, who started his gaming journey on the Atari 2600 36 years ago. He has a weakness for retro games, mods and the cult classics most people haven't heard of.

Since he is British, his body is about 60% tea.